Tallinn, Estonia - from a knitter´s perspective

Estonia and knitting are linked together, and will probably be so forever. Knitting has had a central function in the Estonian culture for hundreds of years. Famous is the fact that for a wedding it was not uncommon that hundreds of pairs of mittens were knitted as gifts for the guests.

A vast amount of knitter´s around the world have read books about the Estonian knitting traditions and have perhaps also knitted socks, mittens and sweaters using traditional Estonian patterns. We had been told that there were a lot of knitted garments for sale in Tallinn. We had also been warned that not all of them were of high quality. We had even heard that it could be a bit hard to find real Estonian sweaters, mittens and so on.

This is Eesti Käsitöö (Estonian Handicraft) run by Estonian Folk Art and Craft Union. There are three of these shops in Tallin and here you will be pretty sure to encounter only Estonian design. If you want more information about Eesti Käsitöö you can visit their website: http://www.folkart.ee/eng/about-us. The first information reads: "Established 1929 (abolished during the Soviet occupation). Re-established in 1992". The Estonians are very proud of their traditions and I think that in a historic perspective that is very understandable.

The shops have a variety of crafts represented, not only knitting. Many designs are traditional , but you will also find examples of new ways to use the traditional materials.

But of course there are also knitted items and in the cellar of this store you can find the Work-shop of Riina Tomberg. Riina has written a very interesting book called "Vatid, Troid, Vamsad - silmkoelisi kampsuneid Lääne - Eesti saartelt" (Vatt, Troi, Vamsa - Knitted Jackets from West-Estonian Islands) that is highly recommendable (more about that in another post). In her shop you can find a lot of knitted items mostly different kinds of sweaters in a variety of traditional patterns.

These are hand-made sweaters. Nota bene: ALL sweaters that we saw during our visit (and we saw a lot of them, believe you me!) were hand-made. NONE, though, were hand-knitted! This was at first a big disappointment. But after a while I could accept that. Since each one of them was knitted on a knitting-machine by one knitter, they are in a way unique. Knitting is still a way of making a living for many women (we never heard a mentioning about male-knitters) in Estonia. And, judging from the price of the sweaters, it is not a well paid occupation. In Sweden yarn for a sweater probably costs more than what you pay for a finished sweater in Estonia.


The place that we had heard most about from friends was the "wool wall" where locals sell their knitted garments to tourists along the medieval city wall. The stalls were impressive - I have never seen so many knitted sweaters, socks, gloves, hats cardigans etc. before. But it was also very obvious that a lot of the things sold were not in the traditional Estonian style. The beautiful old geometric patterns had to keep company with dogs, cats, reindeers and even the Moomins that now clearly dominated the patterning. I can see that this happens because tourists find these patterns sweet and amusing - but I think it is a bit disturbing. An Estonian woman told us that these patterns are knitted because a lot of the shops and stalls that sell knitted items in Tallinn are owned by Russians, and that the Russians are not especially fond of the Estonian traditions, so they don´t care about keeping the patterns traditional.

I can see that there is a conflict here that probably comes from historic and political events. As a tourist, of course, you have to make your own choices regarding this when you make a purchase in Tallinn.


Another out-door market is called Viru Turg. The items for sale here are very similar to those at the wool-wall. Now do not get me wrong. All these places are worth visiting - if you know what you are looking for you are likely to find it.

The young woman in the store told us that they bought sweaters and woven belts from elderly ladies (mostly relatives) that had made these patterns all their lives. And now these ladies are getting older and older and soon are about to be too old to knit with the speed required for the business. It is a big problem to find new knitters who know the patterns and the techniques.

It is a bit sad to hear about this. I think it would be such a loss if the techniques and patterns are to be forgotten or not used. Look at the sweater from Kihnu - who could not like a garment like that?


These were the last belts that an old woman sold to the shop - she told them that she would no longer do band-weaving because she found it to hard work. Even if I know that it is not likely I do hope that she had some-one to pass her patterns and traditions on to. There seems to be so many important things getting lost nowadays.


We found a sign announcing the Estonian History Museum Shop - I love Museum Shops! It was tiny - three people made it crowded. But we found interesting things - books out of print, and a collection of charts for mittens, that we had never heard of. Yummy!


I do not know what to think about this cap. You will find them everywhere in Tallinn. These caps are said to be very popular in Estonia. It is an extremely long cap (in total about 180 centimetres) and a scarf in one. You will never freeze again. They are often made with traditional patterns but you can also find them with almost any motif imaginable if you browse the stores and stalls. 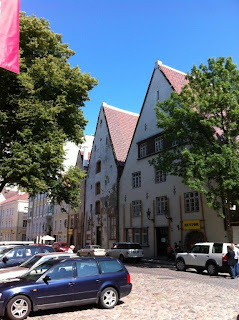 Tallinn is definitely worth a visit. Just be observant and look closely at the knitting before you buy anything. Consider the finish. Study the seams. Does the gauge seem to be right? (Some sweaters are a bit "sloppy", try to avoid them!) Do you want traditional Estonian? Then stick to the traditional patterned items. I do not mean that there is anything wrong with the other items. If you have longed for a sweater with the Moomins on - buy it. If you want an example of Estonian knitting to bring home with you - stick to the traditional. 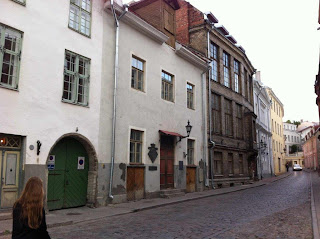 Do not forget to enjoy the Old Town itself. The houses are worth looking at.
Tallinn handicraft map 2013. 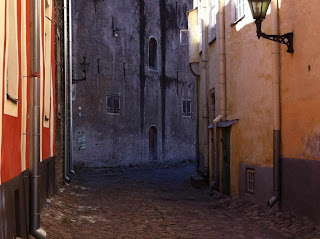 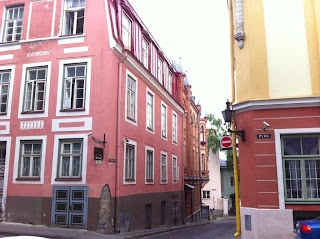 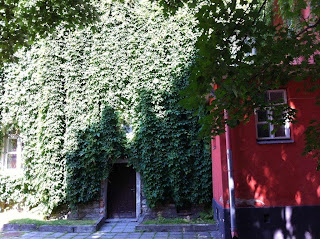 Lars
I am BARITONO on Ravelry and morbror_lars on Instagram

TOARP - hat in twined knitting, is available as a free pattern - download now